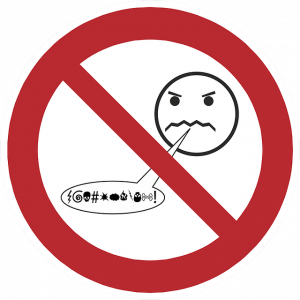 We all do it from time to time no matter how moral or upright we think we are. Let’s face it. It feels damn good when we do it. There is just something about dropping the “F bomb” that releases a lot of tension and pent up emotions. In fact, i just did it as I’m sitting at the keyboard writing this: just spilled coffee all over the desk because my cat jumped up and scared the s*&@# out of me. Damn that felt good…I swear!

Anyway….what I was getting at was that swearing does release a lot of frustration and anger usually within one word. Amazing how that works. Research has been done at New Zealand’s Victoria University that basically said that ‘letting it rip’ wont change or improve the situation but it is a useful emotional release.

So, the question is, do you as a manager let your employee or employees swear around the office? My answer to that would be ABSOLUTELY! However, a word of caution. It has to be in context. What I mean by that is that a person shouldn’t go around the workplace just uttering curse words for the sake of it. It might offend an employee or a customer. It is also bad manners to do that. I never saw anything wrong with my team while they were in the office and talking amongst themselves to swear every now and then. I’m certainly not condoning the idea of every second word a person utters to be a swear word. That just shows a lack of vocabulary if nothing else. And an employee should NEVER EVER swear in front or at a customer. In my early days at managing I told one customer that he was a f%^& idiot and to get out of my store! That did not go down well at all with upper management and I nearly got the boot.

Believe it or not but the same study also concluded that staff members who have a bitch and a moan to each other improves morale around the workplace too. The F word is the most commonly used swear word but in the context of a close knit team, it could not be considered offensive. To me, that makes perfect sense. If it doesn’t to you, please let me know what you think about this.

There are enough pressures at the work place these days and by letting your staff swear around each other to release the tensions of a bad day, let them do it. It costs nothing and the less you have to do to maintain their motivation and morale the better.

A Co-Worker Gets Fired

A co-worker gets fired.this can happen to anyone at any time. As a manager though, a lot of the times...